Posted on January 8, 2013 by nituchugani 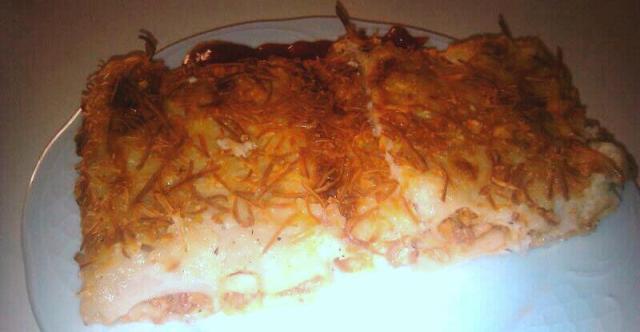 Soya mince is in my opinion one amazing food product. There is so much you can do with it! I already have a few recipes on my blog using this product to make patties (tikkis) out of this. I find it godsent for the vegetarians who can enjoy a meat like dish. In europe we can buy this is many health food stores.
How to get the best results out of soya mince?  It has a peculiar flavour and so to minimise that i just I soak it in boiling water and leave it till its softens, for about an hour. Some people even boil it.  Once this is done you can cook it the way you cook minced meat and it tastes really good.
My dear friend Dipa sent me this lovely canneloni recipe and pic which i am sharing with you. I used to make this  canneloni a long time ago and so i will also give you the way i make it. I don´t make it anymore as my family prefers the one made it meat mince.
INGREDIENTS:
1 packet of quick cook canelloni sheets
1 cup of soya mince, boiled in water and then rinsed
2 tablespoons of a good quality spanish olive oil, not extra virgen
1 large white onion, minced
4 flakes of garlic , minced
1 green capsicum , chopped fine
2-3 tablespoons of tomato paste, also known in spain as tomate frito
salt and pepper to taste
3 cups of white sauce
grated cheese as needed
METHOD:
In a large pan boil a lot of water and cook the canneloni sheets according to the instructions on the packet. Each brand has its own cooking time. Once cooked lay the sheets on a kitchen towel.
For the filling:
Heat the olive oil and then add the onions, garlic and capsicum with the salt and cook till it starts changing color. Add the boiled , drained and rinsed soya mince and cook with pepper till it browns a bit. Add the tomato paste and mix well. Cool.
In a baking tray put a layer of white sauce. Fill the canneloni sheets with a bit of the cooled soya mixture and roll. Place carefully on the tray side by side. Cover with the rest of white sauce and top with grated cheese. Bake in a hot oven (200 deg) till bubbling and cheese has melted and browned.
FOR THE WHITE SAUCE:
Makes about 2 cups of rich white sauce:
3 tablespoons of butter
2 tablespoons of white flour
500 ml of whole milk
salt and pepper to taste
a pinch of nutmeg
grated cheese (optional ) for a cheesy white sauce
METHOD:
Melt the butter in a saucepan taking care not to burn. Add the flour and cook for half a minute on low heat so that the flour loses its raw taste and then add remove from the heat and quickly mix in the milk whisking so that no lumps are formed. Put back on heat and stir continuously till thick. Add salt, black pepper powder and a pinch of nutmeg. If you want you can also flavour it with herbs such as oregano and a bit of garlic powder. Add the grated cheese and mix well. This is your white sauce (bechamel).
NITU DIDIS TOUCH FOR THIS RECIPE:
When i used to make this i would add mixed herbs into my soya mince mixture as well as some ketchup and some hot chilli sauce.
WHICH SOYA MINCE IS GOOD?

FOR JAIN RECIPE: Omit the onions and garlic and proceed….

This site uses Akismet to reduce spam. Learn how your comment data is processed.