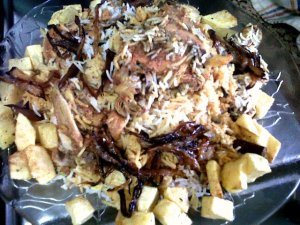 BIRYANI…is a complete Indian rice dish which is rich because of the amount of spices, oil , nuts and raisins used. It is a complete  one dish meal  due to its calorie content and is the main dish for many celebrations.
I made it OIL FREE (tho i will give you the option to make it with ghee… if you want)
The side servings are deep fried onions, deep fried potato cubes , cashewnuts and raisins AND CAN BE OMITTED TOTALLY… I  just put it on the top so that if anyone  on a DIET or watching their cholesterol count can omit that totally while serving themselves.
It can be made with vegetables, fish, meat or chicken.. or even a combination of vegetables and meat. I made it with chicken and a easy way. Some biryanis are complicated and tedious but in todays times of lack of time …this recipe of mine is a boon!! Do try it out. Biryani is usually served with “RAITA” which is yoghurt mixed with chopped onions, tomatoes, cucumber and coriander leaves.
INGREDIENTS:
4 chicken legs and thighs, skin removed
1 cup of youghurt
5 cloves of garlic
1 inch piece of ginger
1 small red onion
2 green chillies
2 teaspoons NITU DIDI TANDOORI MASALA
salt to taste
juice of 1 lime
Make all this into a paste in the blender and marinate the chicken in this for about 4 hours. I marinate it in the pressure cooker and after 4 hours i pressure cook it till done.Save the liquid which is left in the pressure cooker. De bone the chicken if you wish, i didnt
FOR THE RICE
2 cups basmati rice, washed and soaked for 30 minutes
5 cloves, 1 cinnamon stick, 2 bay leaves NITU DIDI
salt to taste
6 cups of water
FOR THE SERVING:
2 onions sliced and deep fried in oil (TOTALLY OPTIONAL )
a few cashewnuts
a few raisins
Deep fried potato cubes
a pinch of NITU DIDI PURE SPANISH SAFFRON
Put the water to boil with the spices and then add the rice and salt and cook till rice is 80% done. Strain the rice and keep on a plate to cool.
TO ASSEMBLE:
Melted butter/ghee…TOTALLY OPTIONAL
coriander and mint leaves chopped
2 tablespoons of NITU DIDI GARAM MASALA
Take a good quality saucepan with a tight fitting lid and spread some of the liquid of the cooked chicken. Add a layer of rice and some chicken pieces on top and sprinkle with a bit of garam masala, chopped coriander and mint , and some melted ghee/butter. Cover with some liquid and again layer the rice and repeat the process till the rice and chicken and liquid is used up.
Top with a layer of rice, sprinkle some fried onion and cashew nuts and raisins ( i did not add raisins as my family doesnt like them) . Fit the lid on and leave it on slow fire till it heats up totally, you can tell by opening the lid and when the topmost layer of the rice is HOT…that tells you its done.
Serve with “RAITA”.. see serving suggestion
Here you have a light RESTAURANT TYPE BIRYANI with less calories!!
SERVING SUGGESTION:

TIP: This can be made without the ghee and tastes equally good

This site uses Akismet to reduce spam. Learn how your comment data is processed.